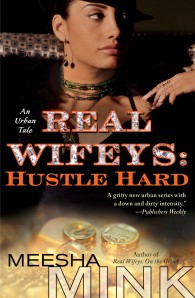 Following On the Grind and Get Money, Mink’s third and final installment in her “Real Wifey” series shifts the spotlight to Suga Alvarez who has a degree in finance and pulls in more than 50 grand as a Newark businesswoman. But a dark cloud hangs over her seemingly happy life as her loan-shark fiancé Dane Greenley refuses to go legit. He ignores Suga’s nagging by saying, “There ain’t no jail cell or coffin built for me.” A drive-by ambush becomes another hood tragedy and sure enough, Dane is arrested by the Feds. Frustrated about being broke, Suga comforts herself with liquor and ice cream. Yet she climbs out of her depression to figure out who set up Dane and how she will make it on her own.

VERDICT A well laid out plot spiced with wild sex moves Mink’s story right along.  Readers will keep turning pages to see if Suga succeeds as she moves towards redemption. Mink’s books are the real deal.